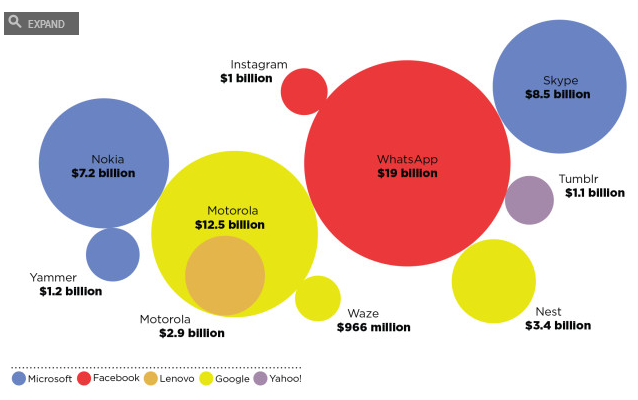 Big tech-companies acquiring small but promising tech-firms to sustain for a long time in market.

The acquisition of the hot messaging service with more than 450 million users around the world stunned many Silicon Valley observers with its lofty price tag. WhatsApp was founded in 2009 by Jan Koum, Brian Acton.

Google acquired Waze for $1.1 billion in 2013. Waze (pronounced as ways) is a GPS-based geographical navigation application program for smartphones with GPS support and display screens which provides turn-by-turn information and user-submitted travel times and route details, downloading location-dependent information over the mobile telephone network. It was developed by the Israeli start-up Waze Mobile.

Microsoft acquired skype for $8.5 billion in 2011. Skype is a freemium voice-over-IP service and instant messaging client, currently developed by the Microsoft Skype Division. The name was derived from “sky” and “peer”. Skype was founded in year 2003.

E-bay acquired Paypal for $1.5 billion in 2002. PayPal is an international e-commerce business allowing payments and money transfers to be made through the Internet. Paypal has become a largely populated money transfer technology on internet.

AOL acquired Mapquest for $1.1 billion in 2000.MapQuest is an American free online web mapping service. The company was founded in 1996.