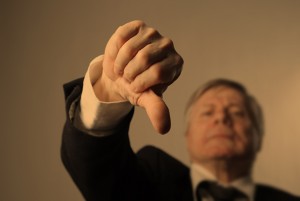 We’ve gotten this question several times while traveling around the world, and we have been amazed at how split audiences seem on the answer. Amazed, because to us this is an absolute no-brainer. If you have to pick between these options, by all means, work for the good company!

Here’s our reasoning. If you are at a truly good company, its leaders will eventually find and dispatch the bad boss. That can take time—months, or even a year or more. In that case, you might even be rewarded with a promotion for having delivered results during your ordeal. After all, everyone has been there at some point in his or her career, toiling for some turkey who’s moody, mean, or just plain incompetent.

But even if you’re not promoted for your “hardship duty,” you will still be better off for having endured a boss from hell. You will be able to stay where you are in the good company with a new and better superior or move sideways to a fresh opportunity. Remember: Any experience you get at a good company where you’re working with smart people is worthwhile, and a stint at a company with a sterling reputation gives you an excellent career credential down the road, if you need it.

But the good boss-weak company dynamic is a velvet coffin. All bosses eventually depart. They move up, out, or sideways. And someday your good boss will leave you, too. In fact, good bosses in weak companies are especially vulnerable to change because they have the extra stress of “protecting” their people from the impact of the organization’s larger problems. This burden can wear them out or make them political pariahs, or both. Either way, in time they go.

In some ways, this question comes down to a choice between short- and long-term gains. In the short term, working for a bad boss, even in a good company, can be a nightmare. But in the long term, when the bad boss is gone, at least you’ll have the opportunity to move on.

Working for a good boss in the short term can be thoroughly enjoyable even when the company is collapsing around you. Long-term, however, those happy vibes will come back to haunt you. When your boss makes a beeline for the exit, you’ll be trapped. Getting a new job after you’ve worked at a company with a mediocre or poor reputation is hard. It’s almost as if you’re tainted. So all you’ll have is a second-rate credential and nice memories. Do your career a favor and get your memories elsewhere.